In my Blog, I want to report on books, apps, or hardware that are really interesting and helpful, that I have read or used myself. I do that with honesty and sincerity. I actually bought Free your Head for the Creative Flow before I even thought of blogging about it.

One thing I would like you to know: I know Roberta Bergmann personally as a very dear and extremely creative colleague. We got to know each other when I founded the first Illustrator’s Group in Brunswick (Braunschweig, Germany). The first meeting was held in “Tatendrang”, a combined studio-shop Roberta shared with 4 talented designers.

In my blog post “Free your Head for the Creative Flow-the Interview” you can read my interview with Roberta Bergmann.

I first came across Roberta’s book, Free your Head for the Creative Flow, at a “Ladies Art Night” that Roberta had held in her new studio. The design and content of the book appealed to me, so I put it on my book list “Buy!.”

I bought it and I enjoyed reading it.

What I like very much about her book: You can read it from front to back in the usual way, but you can also just open a page and be inspired by it. It includes 40 Recipes that stimulate your creativity and 15 more “First Aide for Blockades” recipes, all which contain healing ingredients to help you through those rough times.

Free your Head for the Creative Flow is very nicely designed and easy to read. Her “Recipes” (recommendations) are very well founded and contain concrete examples. Some of the Recipes I knew already, some were new to me, some seem contradictory at first glance, but all contain something that spurs on you and your creativity.

Trying is better than studying

Since such a nonfiction book is meant to stimulate creativity, it’s only fitting that I try a out few Recipes instead of just thinking about them.

Today I’ve prepared a little Menu of Suggestions from Free your Head for the Creative Flow. Let’s see if they taste as good to you as they do to me.

The 1st Course, a Mixed Dish

This 1st Course is actually a mixture of Recipes from Free your Head for the Creative Flow. It’s Recipe No. 1 “Just Start” (Einfach Machen) Combined with No. 4. “Hordus” – relating to “hoarding”.

In my office there is a black box, in which I store objects that I want to assemble as a collage some day. Over the years, no collage has really ever emerged from it. In it are many little things that have been spared the way to the garbage can, i.e. the orange closures from my printer cartridges because they remind me of bird beaks.

I don’t think I have to mention that this little “treasure chest” is overflowing with my little collection of bits and pieces. Because I want to renovate my office, it’s time to do something with the content.

My father and the inherited collection gene

My father is a Collector — his 200 sqm (2153 square foot) house is full of collectors’ trains and old glass milk bottles. I try to resist this inherited urge to collect things, but when I was at the upholster company, Kraftschik, in Wolfenbüttel, the other day, I came home proudly carrying two sample books filled with upholstery fabrics. It was quite a spontaneous decision, of course.

It would be pretty silly of me if I didn’t use the fabrics that I’d brought home and they just hung around in my office collecting dust. After all, every spot in my office is a “premium” zone-but more on my before-and-after renovation blog in May.

That’s why I chose the chapter “Just Start” (in German: “Einfach machen”) for today. I videotaped my activity and will show it on my YouTube Channel at a later date.

The chapter “Just Start” combined with “Hordus”- which is starting a collection of things and – in my case actually using them – triggered some very strong emotions in me. The first was discomfort.

What if what I do and want to show you isn’t good enough? Collage is not a an artistic method I feel particularly comfortable using. After a, people blog to show how professional and talented and perfect they are.

But that is precisely why this principle of “just start” is so important. You dare to do something without worrying about what the result will look like.

This acts as a catalyst.

Free your Head for the Creative Flow, method “Hortus.”
But Stop!

Almost at the beginning, when the first collage ideas were swimming around in my head, I thought about which glue I wanted to work with and opted for the hot glue gun I bought last year. Unfortunately, when I went to get it out of the box it should have been in, it was not to be found. Did my daughter take it to her apartment? I sent her a brief message and she replied in an instant. The glue gun had to be in the box in the basement, where, of course, it wasn’t.

My Creative Flow threatened to ebb as quickly as it came. I noticed my pulse rising how I began gasp for air, like a person drowning. Panic arose in me because my project – and my blog – threatened to become a failure.

But then I realized the good thing about the missing hot glue gun: I don’t have to “complete” my collage, I can allow myself some creative play. It became clear to me again that the result of the collage was unimportant. That was the catalysis.

I played with the objects and didn’t have to design anything for Grandma’s fireplace mantel. I could experiment-with shape, colour and materials. My head allowed me to take a slightly different route and gave the result a different meaning than the one I planned.

Free your Head for the Creative Flow-No. 1: Just start

Conclusion: Everything in this black box is a product of our throwaway society, from the printer ink cartridge closures to the tiny wires and other plastic bits and pieces. We are endangering our environment-we are also endangering our wildlife. The meaning was only clear to me after I pieced the collage together.

Just start — immerse yourself without knowing your goal, because as the Germans say: “Der Weg ist das Ziel” – The path is the goal.

The 2nd Course: Or would You rather plan?

Roberta Bergmann mentions a technique I’ve been using for just over a year: Planning. More specifically, I keep a Bullet Journal. The “Bujo” helps me organize my thoughts and clarify if something is really important to me. I write down not only appointments and to do lists in it, but also project ideas when they light up like a firefly. It’s my jar where I catch these fleeting creatures.

The nice thing about it, is: It’s just for me and makes me independent from my screen and smartphone.

Recently I’ve started writing my blog texts in a separate journal. Planning, capturing ideas using an analogue method allows me to temporarily withdraw from the digital world. I write with a fountain pen, letting the ink wander across the Pages draw its lines and the words that I write I can actually hear in my head.

Long-term planning on the computer is not wrong. The combination of digital and analogue planning helps me get into the Flow. To do this, I use Tap Forms-I’ll be writing more about this in more detail in May.

Recipe 2, “Or would You rather plan?” tastes very good to me. It’s my creative comfort dish.

But what if you really have a creative blockade? And it feels like a noose is sitting around your neck because you’re always supposed to be creative? Right now! And you really can’t come up with any ideas at all? Being a creative professional is one thing, but constantly conjuring creativity on command another.

Roberta Bergmann delves into this in Free your Head for the Creative Flow. For me, the Chapter “Reboot” (Neustart), helped.

I’d neglected my blog for a long time. I was in Wimmelbook (search and find book) Heaven and blog Hell. I lacked the muse to blog and I blamed my work on my new wimmelbook, Mannheim wimmelt. I was “too busy.”

Yet, I think deep down, I didn’t know exactly what I wanted from my blog.

I am a person who craves variety. Unfortunately, this preference for constant change is not necessarily a recipe for successful blogging. You know… writing about one thing today and a totally different thing tomorrow…

When I think of Roberta, I admire her versatility.

It was only after purchasing Free your Head for the Creative Flow that I realized that I wanted to include books and product reviews in my blog. Because I love books, because I like to talk to others about what thy’ve read, because I want to know if it’s worth buying this book or that app.

Besides, I didn’t just want to show my own work (because I see it so often), just as I don’t just want to write reviews. So this chapter helped me to come up with a concept for a blog cycle, which excites (and challenges) me and in the long run brings you, as a reader, valuable information and insights.

So a it is Reboot and a new beginning after all. For you and for me.

If you want to learn more about Roberta Bergmann’s Creative Recipes, you can buy Free your Head for the Creative Flow here (click!) (note, as of this writing, it is only available in the German language), from your favorite bookseller around the corner or from an online bookstore. You can join her international Facebook Book group and subscribe to her Podcast Kopf frei für den kreativen Flow through to iTunes, Spotify and Youtube. (also only in German for now).

If you want to read more exciting interviews and reviews, subscribe to my newsletter today! 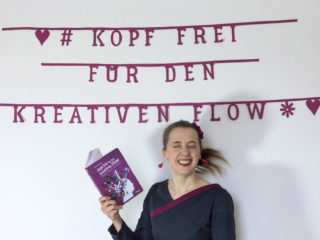 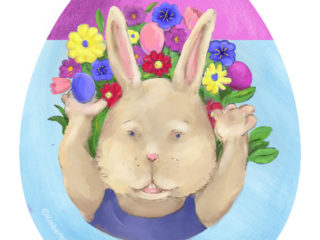